It’s that time of the year again!

I’m so excited that I took to Walt Disney World again this year to check out what offerings were to be had at Epcot International Food & Wine Festival for vegans. Boy was I surprised when I opened the weekend event guide brochure to find listed as #1 – TERRA!

At first I thought my eyes were seeing things when I saw the all too familiar “Chick’n” term that is usually placed on packaging when referring to vegan chicken substitute. There is was in black and beige – the menu:

When I I asked if the selections were vegan or vegetarian, I fully expected to hear vegetarian – made with butter and cream. That wasn’t the answer I received. Instead I heard “Everything here is vegan except the wine.” I nearly dropped my camera. I know a look of surprise spread across my face – I’m so obvious sometimes – it was music to my ears. So I jumped into line and ordered one of every food item.

The Chick’n Curry was interesting, not exactly what I was expecting. I fully expected something that included coconut milk with chopped pieces of  “chick’n” throughout placed over basmati rice. Instead, it was something that look and tasted more like a medium spiced tomato puree over the curry seasoned chick’n cutlet with basmati on the side dry. Taste: good, slightly spicy yet a root vegetable puree would have been nicer or some chunks of veggies would have been nice in the curry.

Again, another dish – Chili Colorado with House-made Chips and Cashew Cheese came in a way that I wasn’t expecting. That dish I fully expected to be in a cup with peppers, chillies, onions, some beans or not, and corn in a beautifully spiced thick soup-like broth with chips on the side and s drizzle of cashew cheese on top. Well, the chips did come on the side yet with these chunks of beefless cubes in some sort of sauce and a decorative drizzle of cashew cheese on top. The taste: good just needed sweet potato chips or better yet some cornbread.

The chocolate cake was the typical vegan chocolate cake. The coconut foam – very lovely. Passion fruit ice cream – nice on it’s own yet too sweet – didn’t complement the cake well at all.

Yet, with all that said, I’m thrilled that at least there is something other than what Disney offers in their restaurant as vegetarian options. I’ll have another try at it again. Disney is way behind the rest of the world. Even Seoul, South Korea has vegan eats, what happened Disney. Don’t you think it’s time you meet the 21st century? Small steps are better than no steps I suppose. 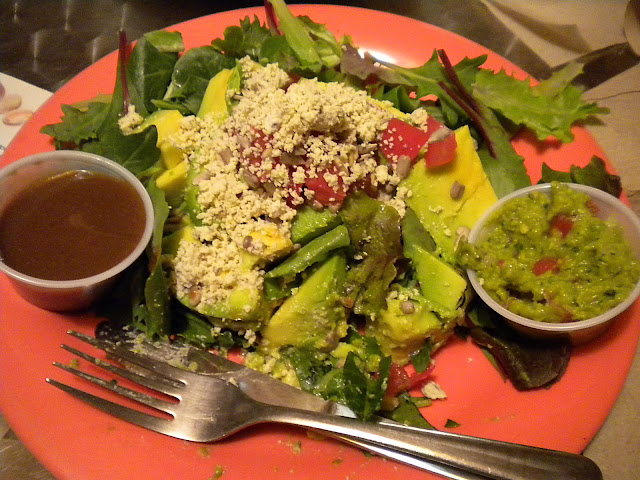 Each time, I take a glance at the daily specials just to see if my favorite is there. When I don’t see it I grab a menu and slowly open it knowing that it really doesn’t change except for more special items that have graduated to the menu. Like a sweet potato burrito I have yet to try.

I continue to turn the page and there it was, my beloved Avocado Fetish! I LOVE this salad. the lettuce is so fresh and crisp as if they walked outside to their lovely garden and picked each leaf to prepare your salad. The tomatoes actually taste like a tomato. The avocados are so creamy and rich with flavor especially when paired with the whirred peas. The whirred peas are just one of a selection of sides that come with the salad. I love the combination of the avocados and pea guacamole and a touch of balsamic vinaigrette is amazing. Now I am very light on the balsamic because really the avocados and whirred peas I order as my side work well together.

So whenever you get a chance to or want to give your body a wonderful treat in the way of a salad, go in, cross your fingers and hope that the salad is available to order. If it isn’t, there are plenty of other salads, great chili, nachos, soups, excellent teas, and desserts.

January is here once again. It is the start of the new year; the time of the year when most people are thinking back to all those amazing treats and desserts that usually take over between October and December. It is non-stop back-to-back holiday celebrations and activities filled with candy, cakes, pies, cookies, and more! Did I say – PIE!

Yes, January is cold and dreary some days, even here in Florida. So you want all the rich soups and some hearty chili to the point that you eat more than you should. You still want to snuggle up in a warm blanket with a large cup of hot chocolate.

However, I, along with millions of others take a journey at the beginning of the year to purge ourselves of all the junk we inhaled over the holiday season. Here we are sort of in the middle of January and I am having sweet treats withdrawals. All I want are some BabycakesNYC cupcakes at Downtown Disney.

I have been doing very well with not having any sweets or treats up to this point. Still, I have been wanting the wonderful slight sweet taste of BabycakesNYC at Downtown Disney.

Is it wrong? Is it wrong to dream of strawberries with cake and lovely frosting. I really want to try this cupcake! YUM!

Maybe next month I will be able to have my BABYCAKES! 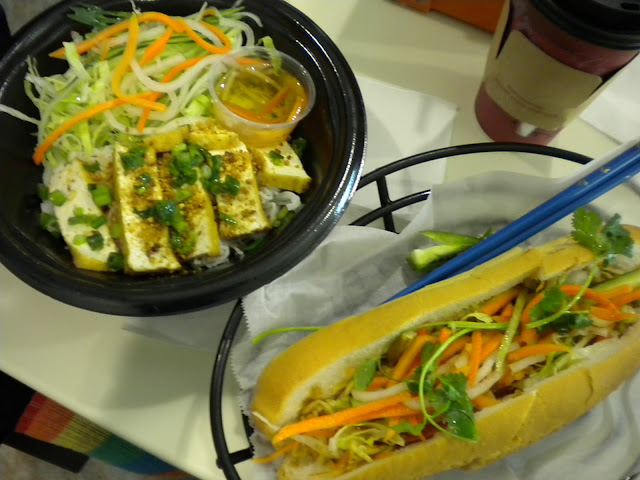 I was in the mood for a sandwich, however not just any kind of sandwich. I wanted something that I had not tried before. My mind and mouth wanted something light and delicious. This restaurant fit on both accounts. I could not decided what I wanted exactly, so I chose  two different items to try.

The first was a sandwich called “The Veganism”. It had fried tofu, bean curd, jicama, carrots, yam, and vermicelli. Loved it!

The other thing that caught my attention was a Yum-Mi Noodle Salad Bowl. In that category, I chose the Steamed Tofu and Vegetables. It was super light. If you are hungry, I would not get just one. Or better yet get one of those and another item as well. Like spring rolls. Still, it had a fresh, light, clean flavor. Simple, yet tasty.

If you ever find yourself in Orlando, Florida, make sure you stop by this simple, yet clearly defined place. They are located at:

I love going to Walt Disney World, it  gives me the opportunity to be transported to another place and live in the land of make-believe. Of course, when you have been there all day with family and friends, you want to share in the enjoyment of the moment by sharing a meal and /or a treat with them.

Right now the Epcot International Food & Wine Festival is happening. Each country around the world at the theme park has little dishes that represent different regions of the world.

Now imagine a lovely day at Epcot. You’re with your friends and everybody decide to eat around the world. With each passing food kiosk, it become evident that there isn’t any vegan for you. Your only options are vegetarian – filled with eggs, butter, milk and topped with cheese.

You can not believe your eyes. your once lovely day has now turned into a full blown rain storm with the possibility of tornadoes.  Finally, you get to South Africa and there is a vegetarian dish that looks promising. Bunny Chow! According to the description in the weekly guide, it  is a vegetable curry that is served with bread. Finally, right? Wrong!  The chef tells you that it has butter in it.

To make matters worse, the symbol that is being used to display that there are vegetarian options, looks pretty close to the symbol that is recognized as vegan. The only difference one has a leaf and the other has pixie dust. Yet when you are standing at a distance from it, you see the “V” and immediately think that you can eat, only to find out that that is not the case.

I am quite upset by this because it pushes away a great deal of people who are vegetarians that lean more towards veganism. I know, I am visiting an omnivores dream, however this is supposed to be Disney where all of our dreams come true as often as possible. Do vegans not have dreams? I would love to know.

I love going to Downtown Disney to see what fun and exciting activities are happening. Then there are the shops, the smells of popcorn and waffle cones baking, along with fried chicken from Pollo Campero. The smell coming off that place can be a nightmare for a vegan. However, their black beans and rice really hit the spot. Yet the biggest reason to go there is BabycakesNYC .

I love the variety of flavors and colors of all the baked goodies. The staff is pretty cool as well. The only thing is I wish that they had a larger variety of items that the other bakeries in New York and California. Like a cookies and creme cupcake, salted caramel, or Death by Chocolate. I guess what this branch is trying to do is make the basics because they are on Disney’s property with all those new to gluten-free and vegan cuisine. Or maybe they are still trying to figure out what will work best in the South.

All I know is that I wanted my cupcake NOW and I did get it. You just have to love the brownie cupcakes, awesome! If you are in the Metro-Orlando area, make your way there – FAST! Happy Eating! 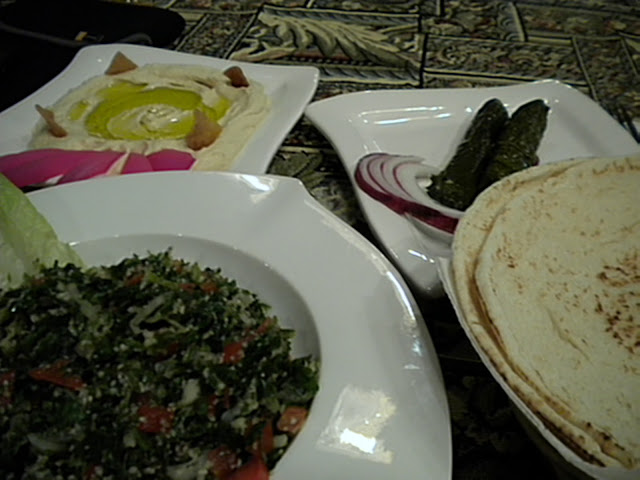 I met a friend at a little restaurant for dinner. She talked about her enthusiasm for finding a place that we both can eat considering that I am vegan and she is not. So I was curious.

Upon arriving at the quaint restaurant in a shopping center no doubt, I couldn’t believe my eyes!

We were greeted outside. It was as if we had arrived at someone’s home. The door was opened for us. We were seated. Once we decided not to have an spirits, we were given orange juice. Very lovely freshly squeezed orange juice. What a surprise!

Then the food made its appearance! The first dish was tabbouleh. You know, that dish you see in Falafel Shops, Jewish delis, and Mediterrain restaurants. It is cold salad traditionally made with bulgur, chopped parsley, mint, cucumber, tomato, onion, and garlic with a olive oil and lemon dressing.  Yet I think theirs is mostly herbs and not bulgur. Also stuffed grape leaves.

Then he hummus (we got two) decorated in two different ways. I think it depends on who makes it.

They also have a Falafel Salad. Who would have thought?! It comes with a yogurt sauce and toasted pita with parmesan cheese and feta sprinkled on the salad with the crumbled falafel.

It looked so good that I ordered one without the yogurt sauce, the feta, and the parmesan cheese covered pita to bring home. Here’s my plating of the salad.

I didn’t have any tofu or yogurt (it was time to go to the grocery store), so I left it plain. Let’s just say, that salad was amazing! You can try it too. If you are ever in town stop by. You will love it!